skip to main | skip to sidebar

What do you do with a deer carcass once it's been butchered? Law dictates that, save for the offal, one cannot simply leave the remains of their kill in the (public) woods. It's a bit of a conundrum, because nature's scavengers will happily claim whatever is left, but it's a law nonetheless. All the same, deer carcasses, post-butcher, are often dumped everywhere imaginable: roadside ditches, parking lots, trailheads. Some were hunted legally; others were poached. I documented a bit of this a few years back, when I visited the Brighton Rec Area in Livingston County.

Of course, it happens here, too. At the end of April, in the span of just a few days, I bore witness to two separate dumpsites, both of them only a few miles from my house. The first, a small stream that crosses Silver Creek Road in Sands Township. The ribcages — two of them — were stripped of their flesh by scavengers, the bones bleached white in the sun. The smaller ribcage was all that remained of that carcass; the larger ribcage was connected to much of the deer's body. Its de-haired hide was submerged, flailing in the creek's current; the antlers had been cut away from the head. Judging by the amount of skin remaining, its attached forelegs, and sawed-off skullcap, I believe that this particular deer, and perhaps the other one as well, was poached. A few days later, after fueling my Jeep, I noticed a crow feeding upon something in the empty lot adjacent to the gas station. We drove closer and realized that it was not one but two deer carcasses, dumped in a macabre embrace. 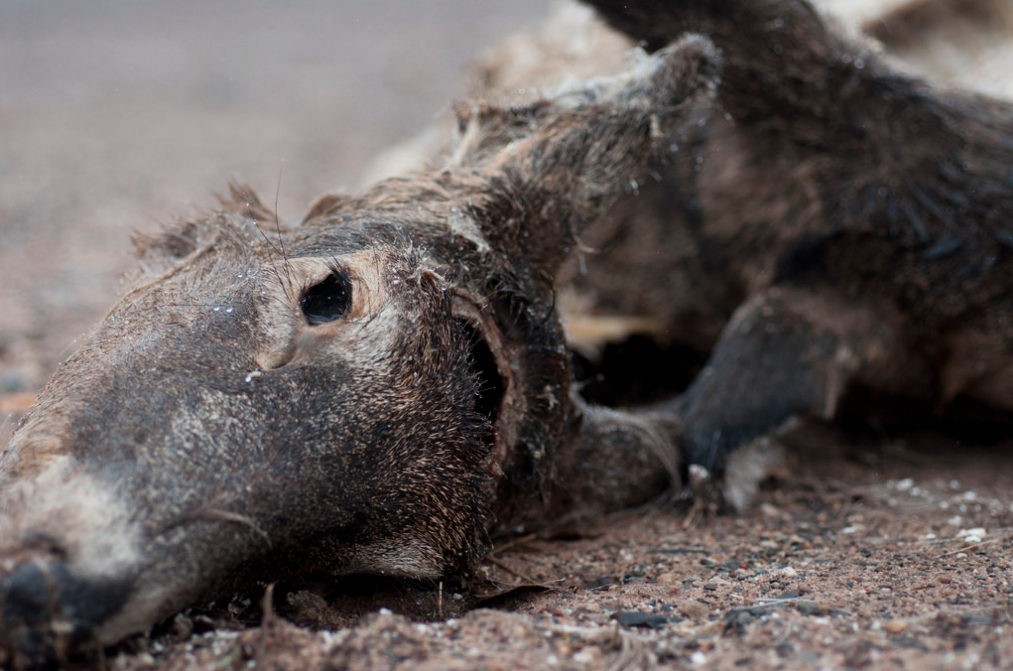 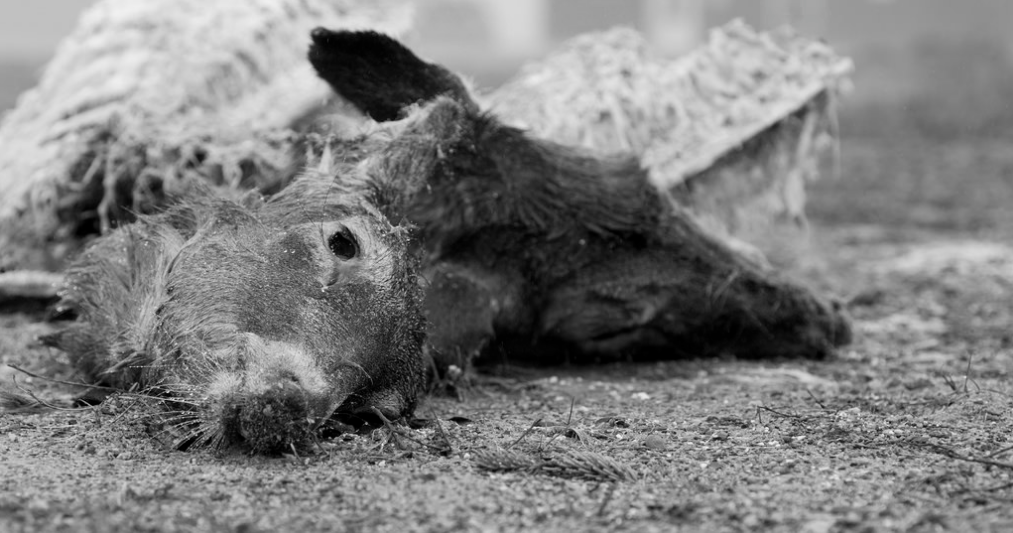 The smaller body was a young buck, antlers cut away from his skull; the other was a fairly large doe. They were likely dumped sometime over the winter and subsequently buried by the snow.

With the snow finally gone, we see the ugliness of winter left behind — at least, until spring's vegetation grows and hides it once again.

While beavers are the best-known semiaquatic rodent in North America, there's another that's more widespread: the muskrat! Muskrats are found in streams, marshes, ponds, and slow-moving rivers, where they build small lodges out of cattails, reeds, and other plant materials. Unlike beavers, they don't create dams. Muskrats are a fraction of the size of beavers, usually weighing in at no more than two and a half pounds. Like the beaver, though, their fur is dense, soft, and waterproof — and as a result has long been an important part of the fur industry.

Earlier this week, we came upon a muskrat that had just been hit on the highway. Not far from where the body rested was a small creek, its waters higher with the recent rain and snow melt. After retrieving the muskrat, I brought it home to photograph. Right away, I made several observations, the first of which surprised me: muskrats do not have webbed feet! The toes on their hind feet are lined with thick, bristly fur which acts like webbing. Their appearance reminded me a lot of the feet of grebes and coots. 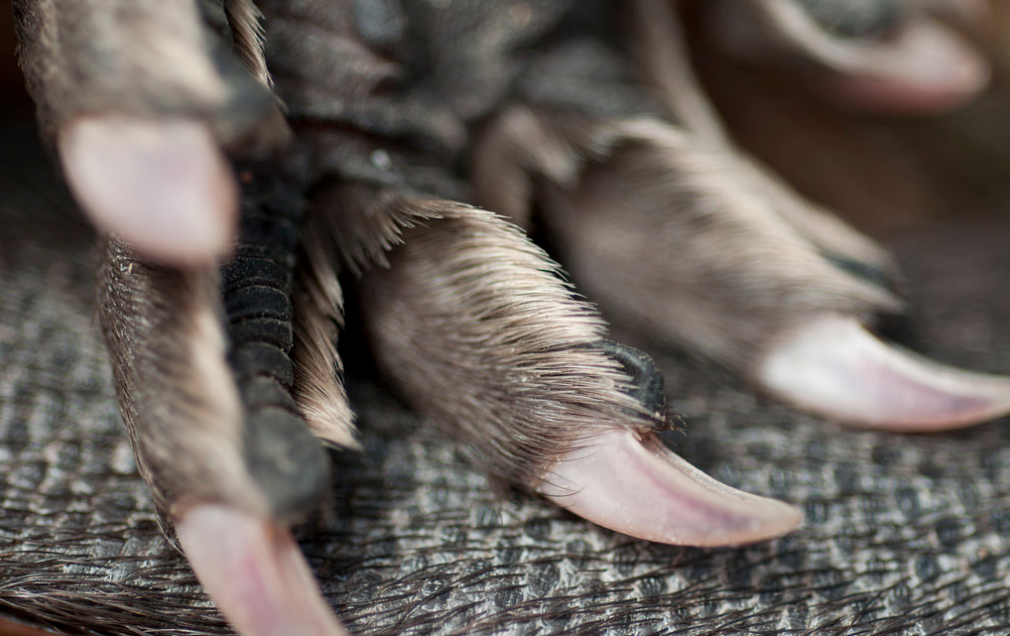 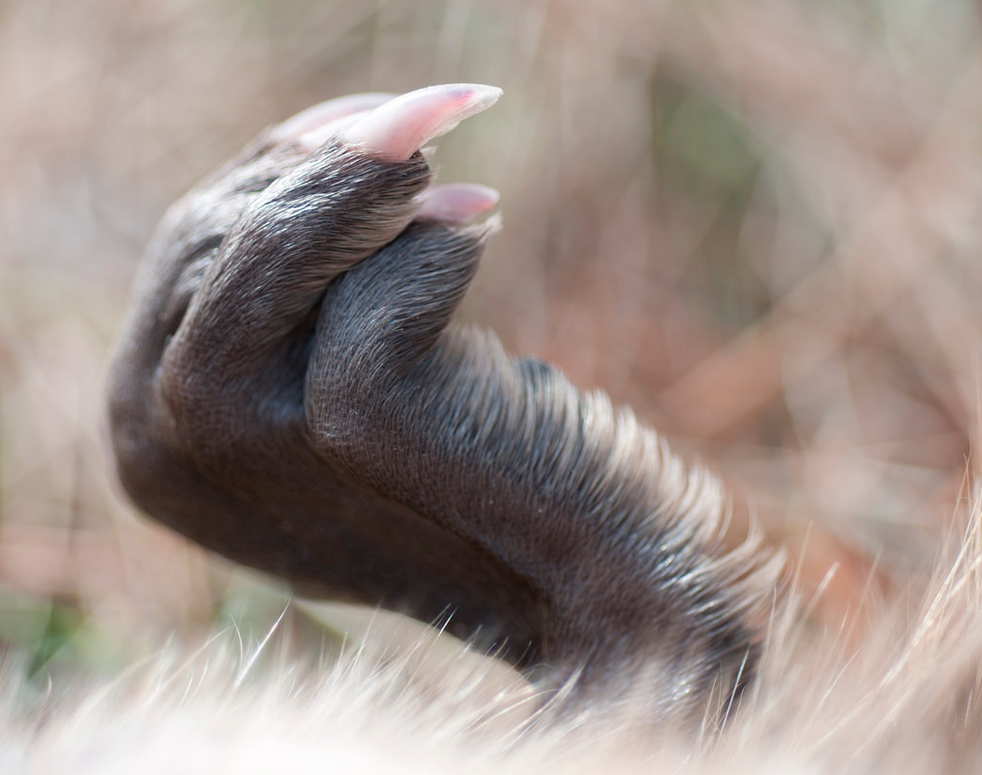 Muskrat claws are an interesting shape, as well. They're surprisingly sharp! The claws are long for a non-climbing rodent. 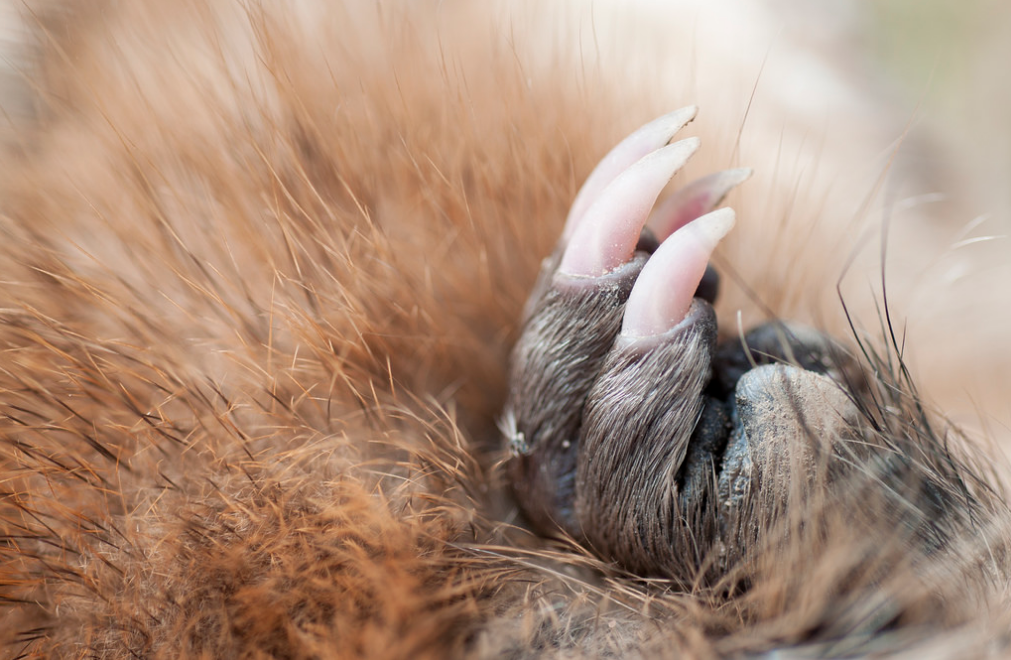 Beavers are famous for their broad, flat tails. Muskrats have flat tails as well, but they're dorsally flattened. The tail acts as a means of propulsion in the water, and this is quite obvious when the animals are seen swimming. In addition to being "scaly", the tail of the muskrat is also covered in sparse, bristly hair. Though the tail appears to be tough and rigid, it's actually quite pliable. 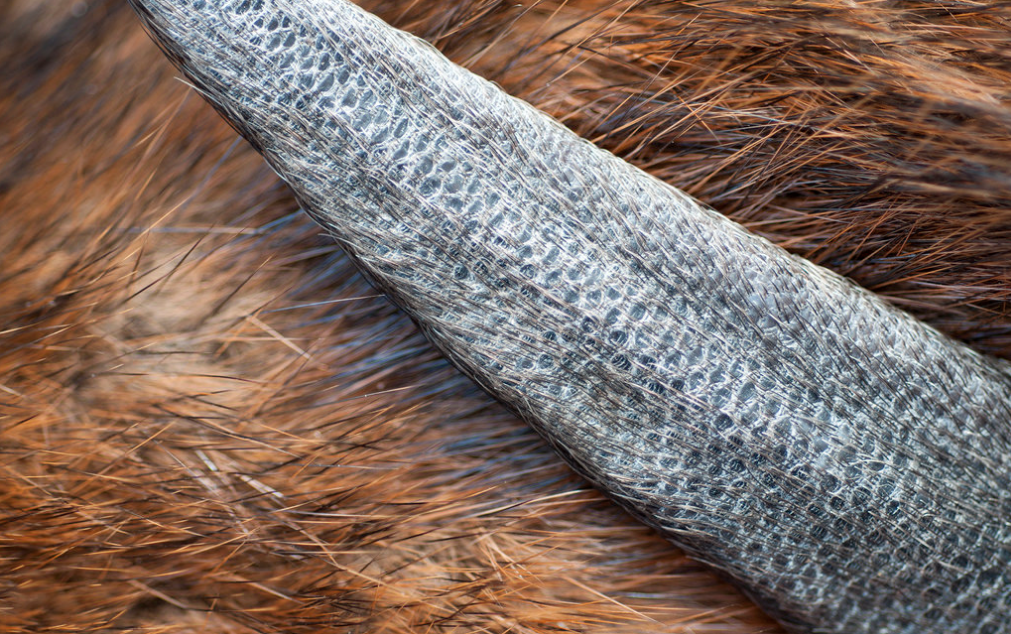 What struck me the most about this animal, though, was its fur. I've handled a lot of furbearers — mammals whose pelts are important to the fur industry — and muskrat fur is, by far, the most luxurious I've had the pleasure to feel. It's dense, thick, sleek, and soft all at once. Unlike other freshly-dead mammals I've examined, this muskrat seemed to have no external parasites: no fleas, no lice, no ticks. Could this be a result of the muskrat's thick fur and mostly-aquatic habits?

The muskrat has a very important role in Ojibwe lore, especially in relation to the creation story. One of the many versions of that story can be read here.

After I was done with the body, I rolled it down the riverbank for the neighborhood scavengers. Within a few hours, a pair of crows was feasting upon it.
Posted by J. O'Brien at 1:37 PM 2 comments:

Last week, Steph and I spent a handful of days in Ann Arbor, where the temperatures were in the mid-70s and the woods were colorful with blooming wildflowers. 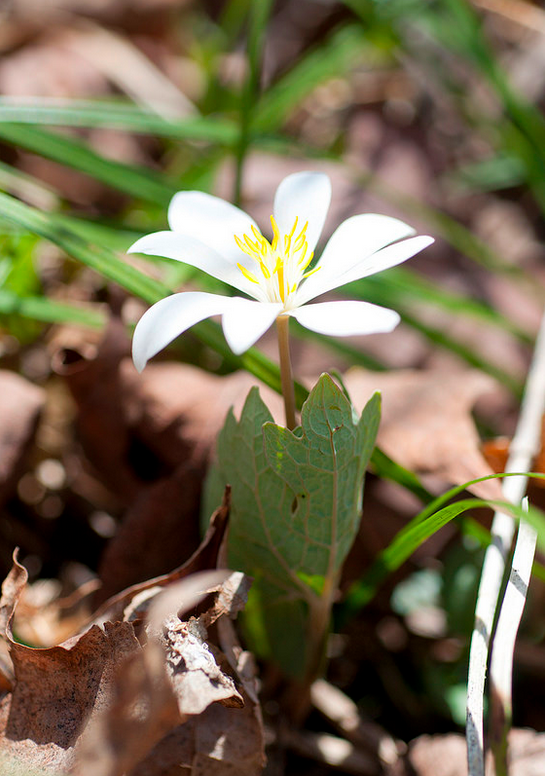 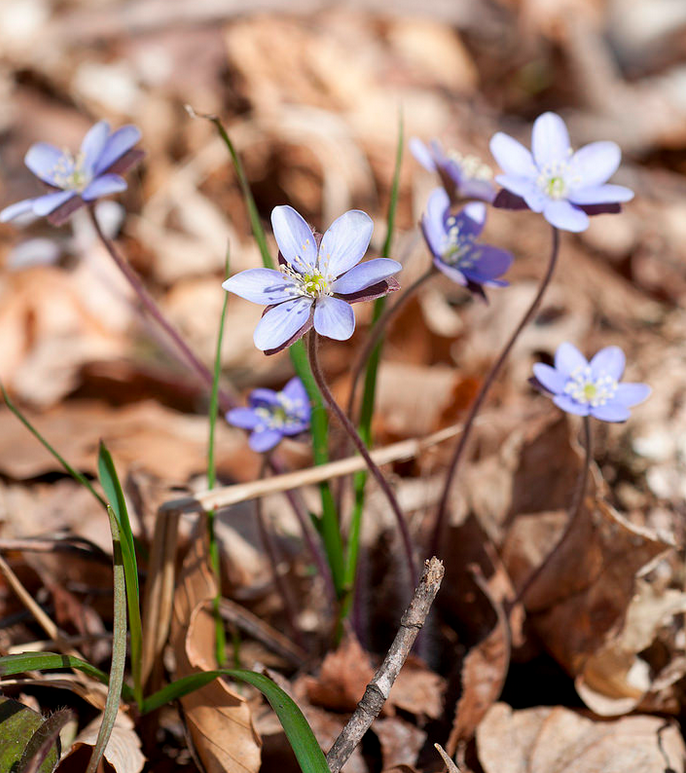 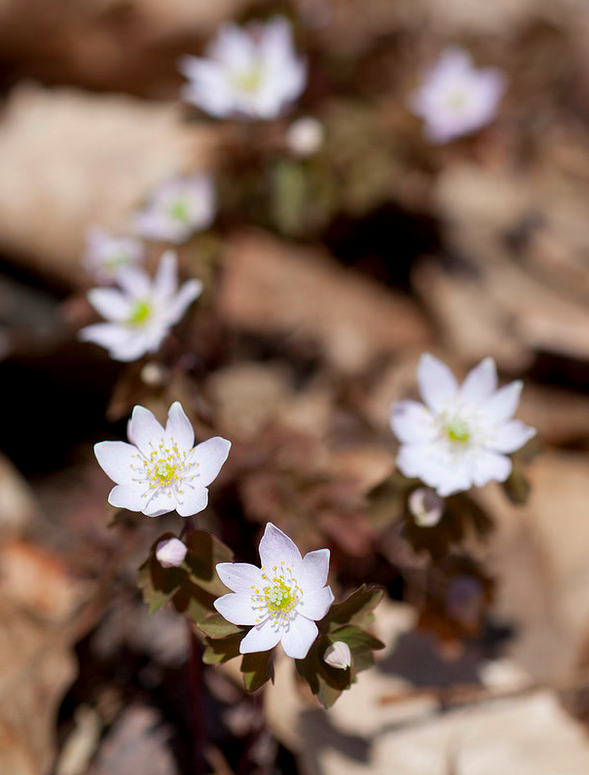 Here and there, deer bones from years past poked through sun-parched grass and fallen beech leaves. 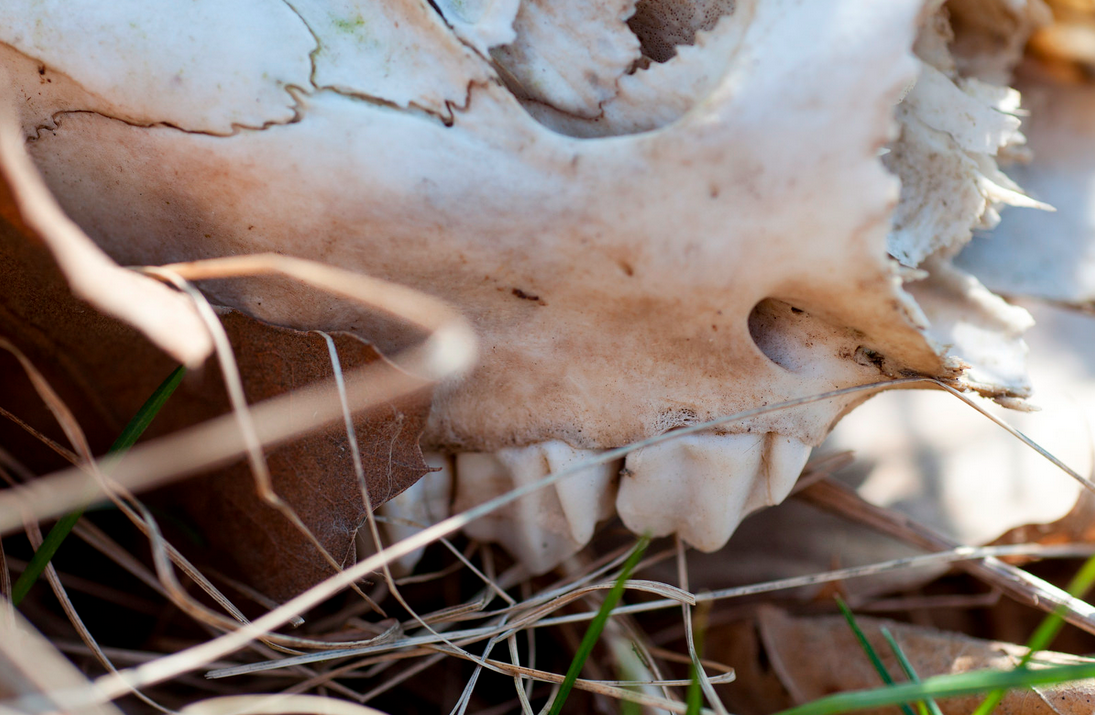 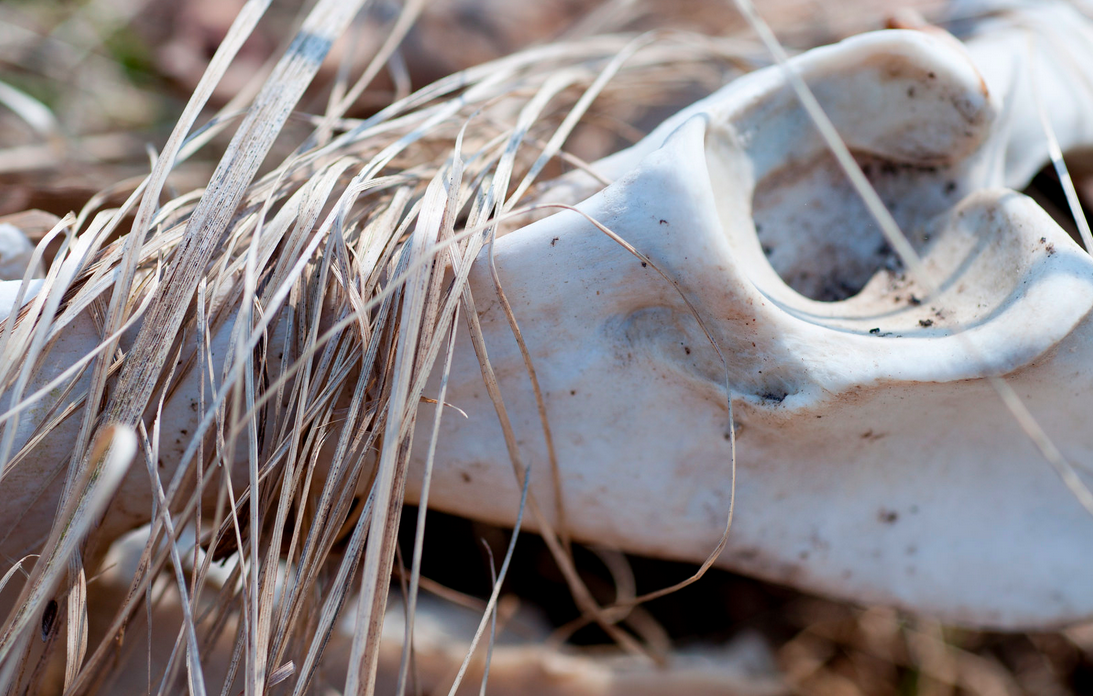 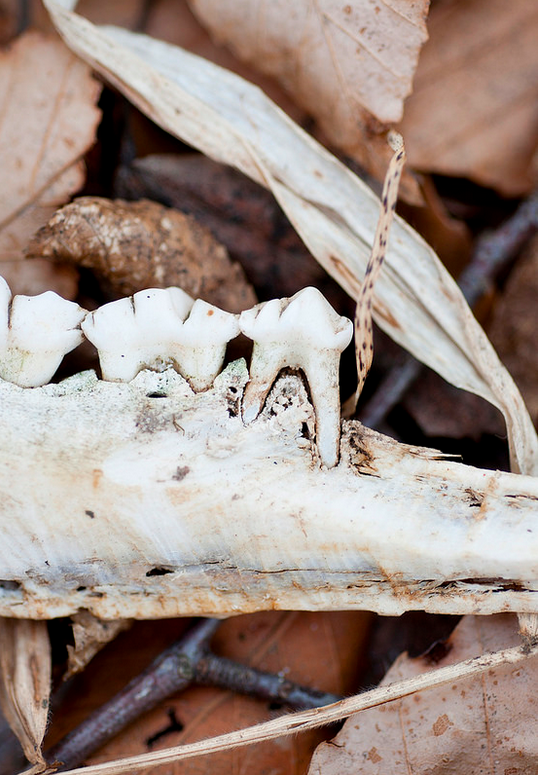 The first two photographs depict the same deer skeleton, seen at the Matthaei Botanical Gardens. They are the bones of a doe I found there last March, whose foot had been stuck in a guyline. The third photo is a squirrel-chewed deer jaw, spotted at the Nan Weston Nature Preserve.

Here in Marquette, the snow is mostly gone. Ice is still on Lake Superior and the temperatures have not climbed much higher than the mid-40s. Needless to say, we are more than ready for spring.
Posted by J. O'Brien at 2:28 PM 1 comment:

The Thaw Before the Storm

After a week of above-freezing temperatures, the colossal snowbanks along the side streets and highways are starting to subside. In their wake they leave a winter's worth of accumulated sand, trash, car parts, and dead animals that have, until now, been encased in snow and ice. It's an ugly time of year, with the filthy road grime and brown snow, but it's also a wonderful time of year: it's early spring, the ground is thawing, and the ice on Lake Superior is melting away.

In typical Upper Peninsula fashion, of course, a snowstorm is barreling toward us now. Early April always seems to bring one last hurrah for winter in the form of several inches of heavy snow, only to have it melt within a day or two of falling.

On my way to work this morning, I spotted something that was very-white against the very-brown snowbank alongside the highway. It took me a moment to realize that what I saw was a snowshoe hare, in its winter pelage. I'd never seen a white snowshoe hare before, and soon I was doubling back to retrieve it. Though it appeared to be a fresh hit, it wasn't. The body had been entombed in the snowbank for some time: it was slightly squished, a little bit freeze-dried, and stuck to the ice upon which it rested.

The first thing that struck me, of course, was the color of the hare. I don't believe I've ever seen a white mammal in the wild before, and the fur seemed almost foreign or exotic, or like that of a domesticated animal. Its ears were small and rounded; its huge feet were covered in dense hair. 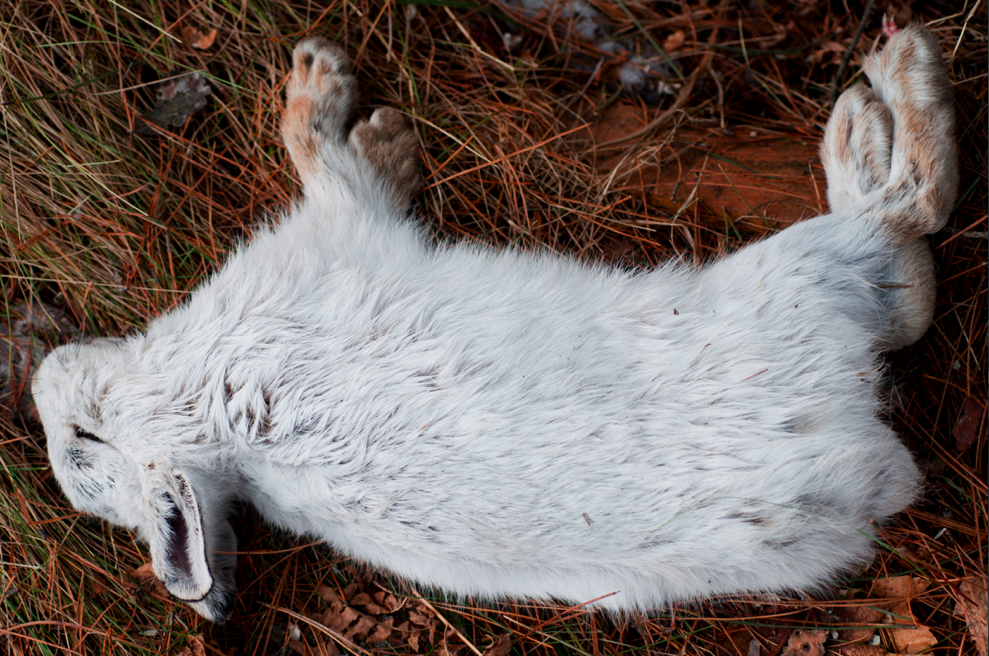 One problem I've had with photographing lagomorphs is that, overall, their bodies are very amorphous. They don't have toe pads or visible claws, their mouths are small (and frankly, kind of creepy), and their thick fur obscures the curves and angles of their musculature. For this snowshoe hare, I focused on the head and ears, as well as its large hind feet. 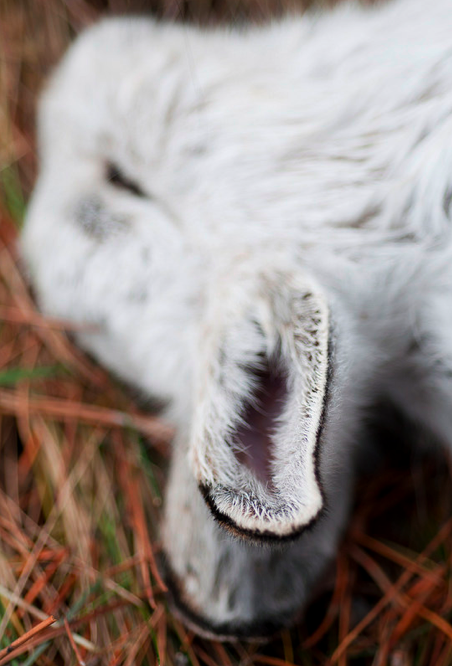 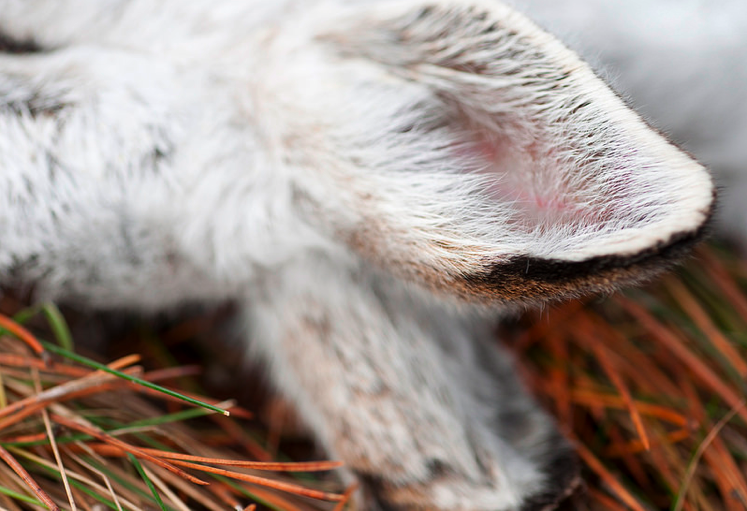 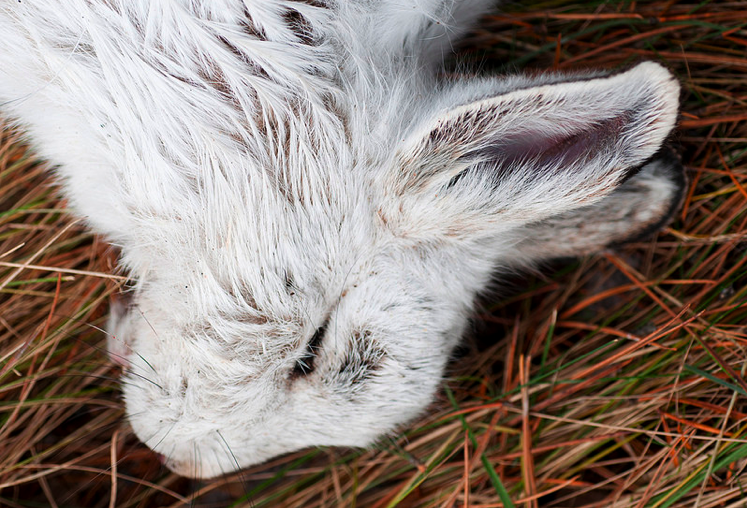 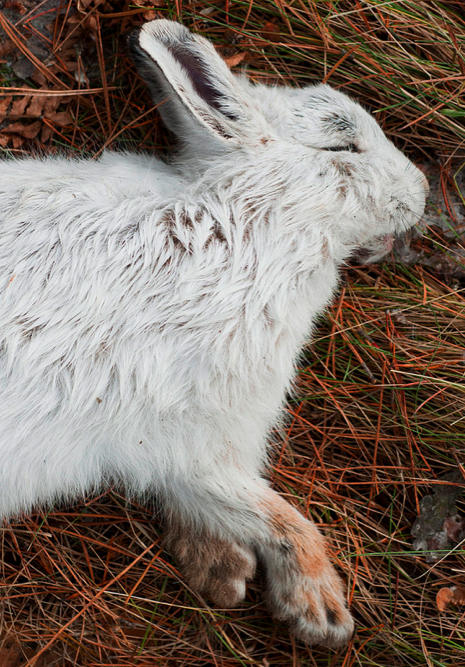 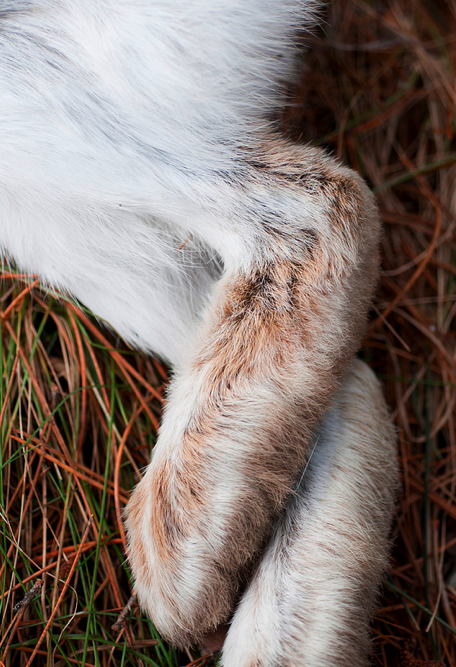 After I finished photographing the hare, I placed it on the riverbank as an offering for the neighborhood foxes. I feel very lucky to have seen this animal; its fur was so very clean against the dirty snowbanks, but I know that the snow that will fall tonight will be that same, bright white.
Posted by J. O'Brien at 10:00 PM No comments:

It's the last evening of February. Despite the subzero daytime temperatures, two feet of frozen slush on the ground, and windchills that continue to dip into the negative thirties (degrees Fahrenheit), the animals continue to survive. The chickadees and nuthatches and goldfinches continue to visit the birdfeeder, even in the most foul of weather; the foxes continue their nightly prowls down the banks of the Chocolay River; the red squirrels continue to defend their territory from gray squirrels, all the while sniffing out potential mates.

And it's sad and frustrating and endlessly upsetting to think that these animals can somehow make it through a winter so cruel, only to be abruptly ended by the treads of a tire. 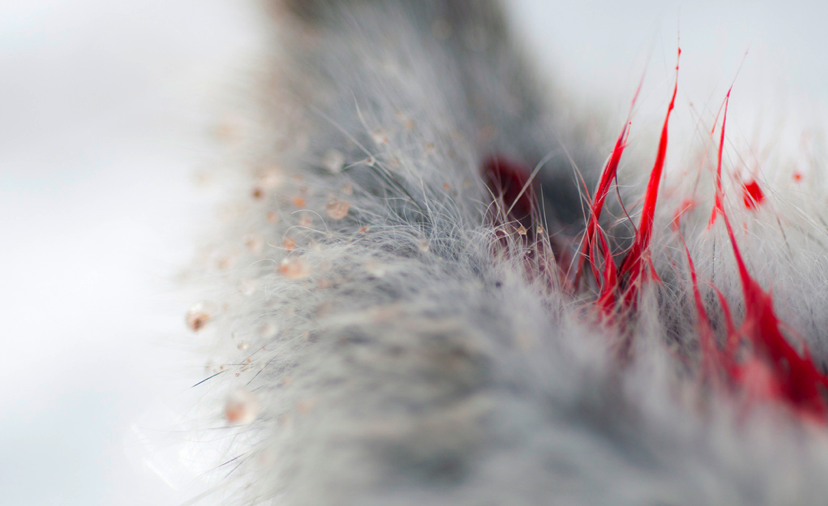 Over the last few weeks, we'd noticed a pair of red squirrels expressing interest in one another — they'd chase each other through our backyard, but never in a threatening manner. We became hopeful that they'd produce offspring; red squirrels are great backyard companions, as they keep gray squirrels away and are enjoyable to watch.

A few days ago, as I was driving home from work, I came upon a red squirrel, hit in the road, just up the street. Whether or not it was one of "our" red squirrels remains to be seen. Still, it was upsetting to see this tiny animal — an animal that survives the winters here with such an inspirational ferocity — utterly destroyed by a car tire. 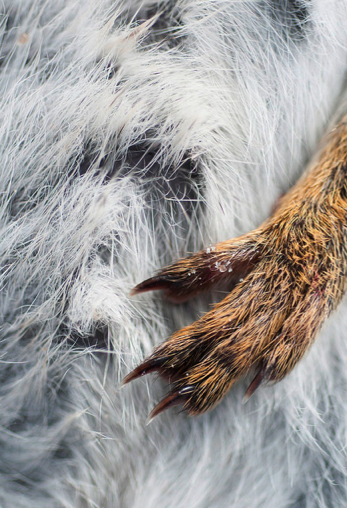 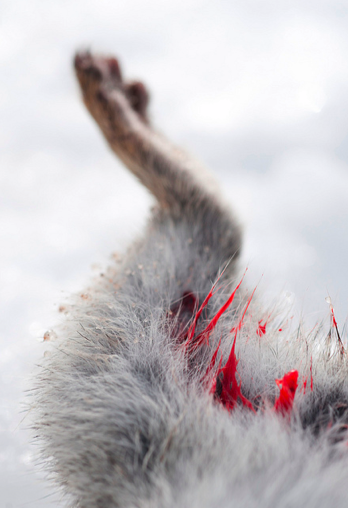 After photographing the red squirrel, I left it on the riverbank — hopefully it was discovered by one of the prowling neighborhood foxes, and was a good meal.


In our society there is a tendency to shun the corpses of non-human, non-domesticated animals. Their bodies are often viewed as disgusting, offensive, and useless things. In nature, however, dead animals are vital to the ecosystems of which they are a part, and countless animals depend upon the deaths of other animals to survive.

When I encounter a dead creature, it gives me pause. I consider the animal, its life, and how it might have died, but I also wonder how many other animals have depended upon its body, and how many more will in the coming days and months. I regard each dead creature I find as an individual, and I treat it as such. I choose to photograph them respectfully, portraying these animals as the dignified beings they are, in life. In every stage of their decay, they are beautiful if not interesting, and I try to portray that through my photography. Dead animals are not offensive, nor are they repulsive, and they are not useless creatures.